Early Saturday of 19 September 2015, Japan’s Diet passed contentious security bills into law. The set of bills are designed to ease restrictions on Japan’s tightly controlled military (Self Defense Forces), and allow Japanese troops to be deployed for combat purpose abroad for the first time in 70 years. Outside the parliament building, thousands of citizens rallied to express their opposition to the laws, because they fear that the laws would fundamentally reshape the proudly pacifist tradition and value of post-war Japan.

Citizen’s protest rallies and dissenting voices were widely reported by the media both domestically and internationally. Yet somehow the coalition government of the Liberal Democratic Party (LDP) and the New Komei Party, along with four small opposition parties, was confident that they had enough public support and thus passed the bills.

The summer of 2015 might have been a turning point in Japan’s politics and media. It was the summer when Japan reshaped its security laws and when the nation’s mainstream media failed to comprehend and therefore convey the substance of the bills in a balanced way.

Before Abe delivered the official remark to commemorate the 70th year anniversary of Japan’s defeat in World War II, the occasion and the speech attracted much scholarly and media attention. This was because Abe was widely regarded as an historical revisionist, thus his words and deeds had the potential to deteriorate Japan’s diplomatic relations with its neighbor countries. Ever since he regained the seat of prime minister in December 2012, Abe was eager to deliver the public remark on the occasion of the 70th anniversary. In his speech, however, Abe included what today are considered keywords concerning Japan’s imperial past – “aggression,” “colonial rule,” “deepest remorse,” and “sincere condolences” – and he emphasized the lessons learned from history.[1]

But as expected, China and South Korea were not convinced by the Abe’s statement. The two countries have contended that many historical issues which took place during Japan’s colonization and war periods have not been properly resolved. They criticized Abe for not actually offering an apology, and for delaying the resolution of these historical issues.

To the contrary, most Southeast Asian nations which experienced Japan’s colonial rule for three and half years – thus substantially shorter compared with the colonization of Taiwan or Korea – positively received Abe’s remark. For instance, Singapore’s Ministry of Foreign Affairs commented the inclusion of the four keywords, though it noted, “Japan should squarely face the past, take the lessons of history deeply and make all efforts for peace and prosperity.”[2] Japan’s most important ally, the US government, commended Abe’s statement.[3]

The overall positive international response certainly was a successful sign of diplomatic effort that the Abe’s administration achieved.

According to PML Index that calculates the average of 14 public opinion pollings in Japan, the worst approval rate of the Abe administration was 39.9%, which was in September 2015. Its disapproval rate was 45.7% then.[4] It was around the time when the above-mentioned security law was passed. Certainly it was the lowest approval rating ever since Abe assumed the prime minister office.

The media were actually quite preoccupied with reporting how the administration’s disapproval rating went up in the course of debates on the security bill and the 70th anniversary statement. Certainly these things had news values for the media; in particular, June 2015 was the turning point. On 4 June, the Research Commission on the Constitution of the House of Representatives was held in which three witnesses who are constitutional law specialists argued that the way the security bills had been debated was unconstitutional. It was then that the public opinion turned to negative toward the Abe administration, and the media started to focus on covering public dissent. 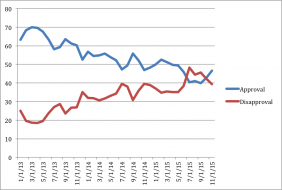 However, it can be argued that, from the perspective of the administration, the approval rates have maintained the secure range throughout 2015. It means that the administration evaluated that its policy and attitude was public accepted despite of public protests in the streets.

Based on the above data, it can be argued that throughout 2015 the Abe administration had confidence to pass the security bills. Its confidence derived from both international and domestic reactions: The international reaction to the Abe’s 70th years statement on 14 August 2015 was generally positive, while domestically Abe’s public approval rate did not go under 40 percent.